New Debates is a biannual publication of the Brazilian Association of Anthropology open for both students and senior researchers. Although it was initially designed for a Brazilian public, ND has recently invested in broader dialogues with scholars worldwide. Although Portuguese remains the official language of the journal, we seek to publish texts in other languages as well. ND seeks to be a platform of dynamic dissemination of both ongoing and completed research at the same time that it presents itself as a space for critical discussion of theoretical, methodological, and political issues that are relevant for the discipline or the groups we engage with in the context of our research. Finally, ND takes the challenge of rethinking academic editorial practice, seeking new formats in a changing context of electronic publications.

ND publishes short texts as a strategy of increasing the dynamic of circulation of ongoing research and debates in vogue. Indeed, this is a key feature of this project as it combines a flexible format associated to journals of scientific dissemination with the critical and rigorous standards of traditional scientific publications. At the same time, willing to contribute to a much-needed actualisation of academic editorial practices, we created the session Compositions (see below) for photographic essays, ethnographic videos, and anthropological documentaries. We respond in this way to a steady demand for formal spaces conceived for the divulgation of a growing audiovisual production. It is worth mentioning that the format adopted by ND is inspired by other periodicals from various parts of the world, which also invest in short texts, new media and/or contemporary debates in a more participatory way, such as: Economic and Political Weekly, Seminar (both from India), Global Dialogue (newsletter of the International Sociological Association) and Anthropology News and American Anthropologist (both belonging to the American Anthropological Association).

The experimentation of new editorial formats is at the core of the ND project. The sections of the journal are therefore designed to contribute to the dynamization of non gratae, silenced or still-to-come discussions. This is why the creation of new sections, adapted to these purposes, is a crucial part of the process of consolidation of the journal and of the fulfillment of its aims. The sections below constitute the original organization core of ND.

This section is intended for the publication of ongoing or newly-concluded research, from student to senior level. It proposes the synthetic presentation of the objectives, questions, methodology and eventual conclusions of the research described. It accepts contributions submitted in the context of specific calls for articles.

It is a space for debate of theoretical, methodological and central issues of contemporary Anthropology, always addressing topics to be debated by invited collaborators. It opens up to epistemological or theoretical problems that go through much of today’s anthropological research, to discussions about the political and social scenario, as well as challenges related to anthropological practice in the 21st century. The question to be debated is proposed by invited scholars who, in their turn, invite some colleagues to comment. Thus, it differs from the New Studies section in the sense that the Forum is a space for debating specific issues by drawing on a specific question. It also does not characterise itself as a thematic dossier, as it seeks to be an open space to controversy and disagreement. In this sense, and in order to explore the electronic resources available nowadays, we allow readers to send contributions to a given Forum even after the publication of each issue. We understand that this is a potent tool for fostering discussions among our community, but also to show the “state of the art” of certain anthropological themes and problems through contributions by researchers who are currently dedicated to the study of contemporary themes.

This is a section aimed at the dissemination of visual anthropology. It receives videos, photo essays and, eventually, other formats to be proposed and that are of potential interest to anthropological research. On the one hand, it plays an important role in publishing audiovisual works, increasingly abundant, of quality and heuristic potential for anthropological reflection; on the other hand, it represents an important editorial advance in the sense that it incorporates new formats and languages in times of consolidation of electronic publications. It accepts contributions through public calls to each number.

Aiming to nurture spaces of critical reflection on new and old problems and approaches, this section plays a central role in our project as it is open to critical essays addressing the theoretical, epistemological and political organization of the discipline. It goes without saying that the standards of academic writing and ethics are strictly observed.

Section dedicated to the presentation of books, films and exhibitions of potential anthropological interest.

New Debates publishes calls of articles with specific deadlines. Every contribution is analyzed by its Editorial Board and ad hoc referees.

Contributions must strictly comply with the standards described below 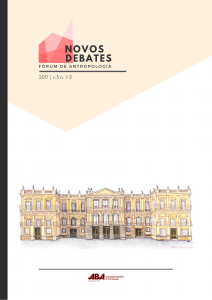